Who am I and Why am I on PubOx?

The opening of my bio on my site reads

"Hi, I'm Unkle Bonehead aka Ryan Ridenour, I'm a 49 yr old truck driver by trade and have just over 27 years in the industry with over 2.5 million accident free miles. I create podcasts and other digital media."

While all that is true there is a whole lot more to it than that. While I feel like I need to go into much more detail in order for people to understand just who I am I also think that all that detail is not necessary.So I will just briefly graze over each topic and let you ask if you want to know more.

Being a child during the 70's and 80's my childhood wasnt that much uncommon for middle American suburbia. So nothing really to talk about there. I got married a couple of times. Didnt really matter as long as I could play my guitar, have fun and talk with people. Then I got into podcasting and that pretty much changed me forever. I love producing them. Not so much being the actual "on air talent" but the background stuff. The production, editing, playing with compressors, eq, manipulating the audio to give a different feel or convey more emotion. They say content is king and it is but the production is right there with it. You can have the greatest content on the planet and the most beautiful video but if the audio is shit not many people will watch or listen to it. I'm not saying my content is always tip top in the production department. And there has been a lot of stuff I''ve gone back and listened to or watched and I'm like my god I cant believe anybody actually listened to that. And I have produced a lot of content and just never released it because I thought it was bad. I do have standards that even I wont abandon. Lol

My absolute favorite thing to do is to play with audio. I recently, very reluctantly, have gotten into producing video. I have always claimed that I hated video editing. But thats not entirely true. The real reason is I have always hated my face, So much so that I go out of my way to avoid mirrors. I honestly dont know if its a fear or anxiety thing. But I've never seen a docotor for it. Perhaps its because I used to percieve video podcasters as being vain and I'm not a person driven by vanity. I have friends that constantly want to do video chats and I turn off my cam. They get pissed off at me but they deal with it.

But I am finally starting to come to grips with my face enough that I've started doing videos. I have posted some to YouTube but I've decided to not use it for anything more than a search engine. I've posted more content on LBRY than any other place. I say content rather than videos because you can post more than just videos to LBRY. I've used other platforms as well but I'm gonna have to say that I have seen the light and moved into the web 3.0 by utilizing Hive. But thats all coming in future posts and this post is about my background.

How I got here

This post has been almost a full year in the making. I started on this path about 10 months ago when I landed on a site called switching.social which provides links to ethical alternatives to social media such as facebook, youtube etc. One of the categories was for self hosting and on that list was a debian based distro called Yunohost. While its true I do not currently use Yunohost I do still love the project. It provided a great way to host all of your own data and your own corner of the fediverse. Ahh, yes the fediverse. The answer to all the large social media mega corporations grip on users data and privacy solved by creating a bunch of smaller social media mega un-incorporations.

Dont get me wrong, I know I may sound bitter but I'm not. I was on a quest to be decentralized and I believe that is the fediverse's goal. It's answer is simple, self hosting. Which is correct. But the problem is that costs money. Not everybody can afford to go rent some vps and and have knowledge to admin their own server. Thats where I thought distros like Yunohost could come in. You could set it up on a raspberry pi and even carry your server in your pocket. All you need is a connection to the internet. But again this comes with some technical knowledge to put together and admin. So to learn all this I started a podcast you might've even already heard of. The Self Hosted Podcast was started with the full intention of it being all about Yunohost. But it grew into my journey here. The fediverse is a great idea but it still isnt decentralized. Mastodon.social, PeerTube.social, Pixelfed.social, etc are all large centralized instances with millions of users data (including mine) that we as individuals put trust in the admins. It still isnt what I'm looking for.

My Revelation of what is Decentralization and Web 3.0

I have to throw in a couple of shout outs here to some fellow podcasters that helped me in the following revelation. While I have not personally spoke with either of them on a one to one basis at any time nor have I ever asked them for help or recommendations outside of just watching their podcasts, over and over sometimes, they are both very knowledgable and while they wont say they are experts I will call them experts. They have ways of speaking in laymen terms and have helped me tremedously to understand this whole concept and world of cyrpto. Girl Gone Cyrpto and Scottcbusiness. Thank you to both of you for all that you do for this community and thank you especially for helping me to understand. If you reading/watching this and dont watch them you must stop right now and go subscribe to their shows.

Maybe its because I'm a bonehead or that I just dont have the technical mind that some other people do but all this time I was looking for an app or a company that would make an app that would decentralize my digital self. Perhaps its because I was coming from what I was already conditioned into thiking that its a corporation that should provide me with a social media site, email, entertainment, education, shopping, etc while I'm doing things online. But either way it hit me like a baseball bat to the face one day while I was looking into this whole world of crypto and dapps.
I was chatting with the developer of Engrave in discord when it hit me and I started rambling a bunch of off topic nonsense and he was all like "What the hell are talking about?" Lol. Poor guy probably thinks I'm nuts. But ever since then I've finally understood what it is to be "decentralized". Its not an app. It's not a site. Hell its not a company. Its you! You choose what to put on online. Yes I know thats not the new concept. Thats always been the concept but what is new is the medium you put it in. In web 2.0 your info, you, your data was put into a database and that allowed corporations or other actors to easily access it for any reason they wanted to. You consented for them so you could use their "free" app. You essentily turned yourself into a product in exchange for thier product.

Back on episode 21 of The Self Hosted Podcast I talked about IPFS and using it for self hosting files. So I wasnt really all that far from my revelation. So I started really looking into things to understand this situation. I'd heard of Steemit and Dtube for a long time now and never knew what they really were. I ran across Blockstack and checked out the ecosystem. Holy shit! They had over 100 apps! And it was stupid simple to get in and use them. But I ran into a problem. I honestly dont know what it is and if somebody does know please tell me. But I'm checking out there apps and there is literally nobody else on them. At least the social ones. I would log in and look around and its literally. "Test post 1 2 3". "Test comment on Test post" "Test post with image", etc. I mean c'mon, man. The "community" is over a year old and there is no interaction of a community. So I went to check out Steemit since I now understood what it was. It was literally a week after the Justin Sun drama and the big split went down. And I was like well crap. Dont think I'm getting into that after reading what he did. So I jumped into Hive. I figure if you pissed off that many people you werent for me. Hive had posted there philosphy and I saw that the community was fully onboard so I jumped onbaord as well since I agree with them and what their vision is for the future.

Just a short couple of weeks ago they only had a handfull of dapps in the ecosystem but they were everything I require. Engrave for blogging, 3Speak for video hosting and live capabilities. There is also Vimm for live video streaming as well. There is also storage, wallets and browser extensions. I know I probably shouldnt put all my eggs in one basket and I'm not going to. I will diversify across several ecosystems but when some one wants to access my "archive" of podcasts and shownotes they will be doing it on hive. Because I am moving all of my blogs and podcast shownotes to Engrave. My ideal solution is to have my domain point to a landing page similar to Scott Cunningham's Lnkly page. Then point to subdomains for each of my podcasts. ie tshp.boneheadmedia.com would point to all the posts on Engrave for The Self Hosted Podcast and truckinutz.boneheadmedia.com would point to all the TruckinNutz podcast posts on Engrave, etc. Since there is no landing page app on hive yet I may just set up a single page and host it on Runkod (a Blockstack app).But I would prefer to keep eveything on Hive. If You have any more ideas or suggestions please let me know.

Now just a few days ago as of this writing/recording hive is starting to be listed on some major exchanges. Its still early days and I've got no clue what that all means but there sure are a lot of people I've grown to trust in the crypto space that are excited as hell about it. Maybe one day I will understand what the markets mean and how it all works for crypto but thats not what I'm interested in. Never have been and never will be. For me wealth isnt money. Money is just a tool. Knowledge is wealth and thats what I want.I dont want to just know things. I want to know how things work and how it got there. Kind of like driving truck for me. Its not the destination I'm interested in. Its the ride to it. 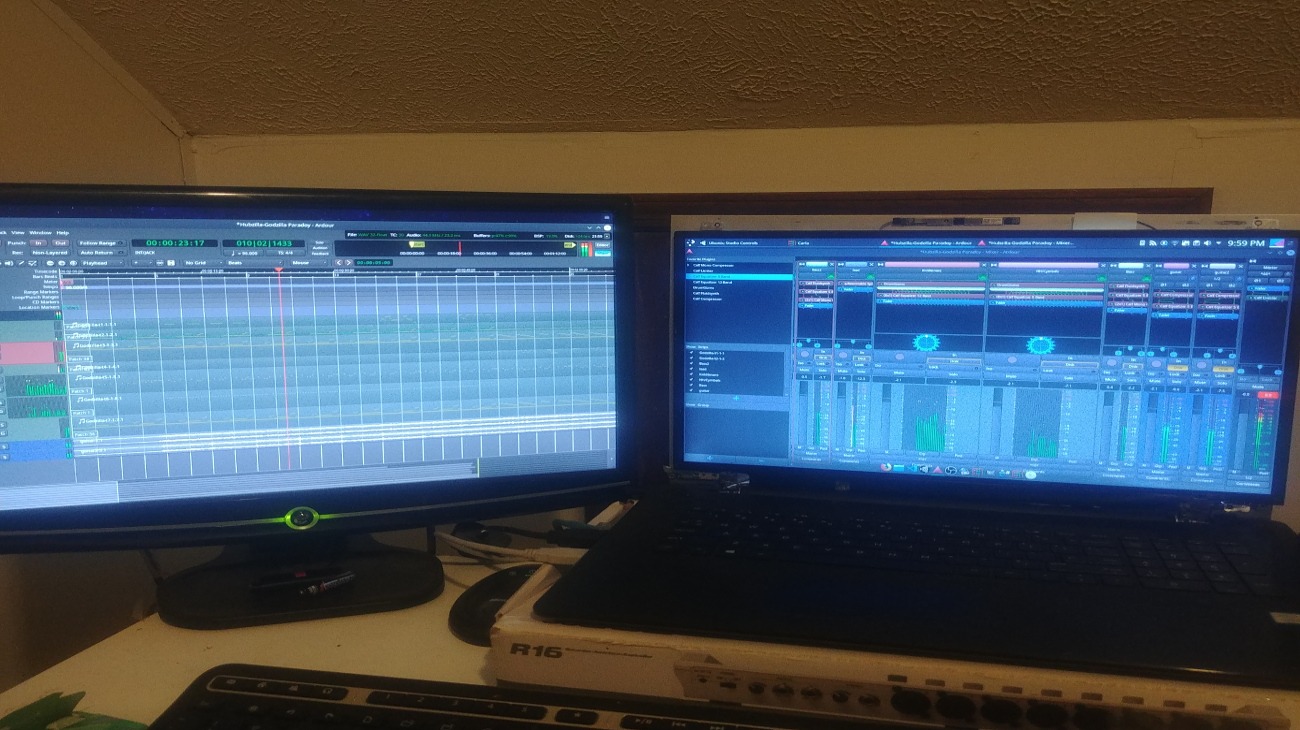